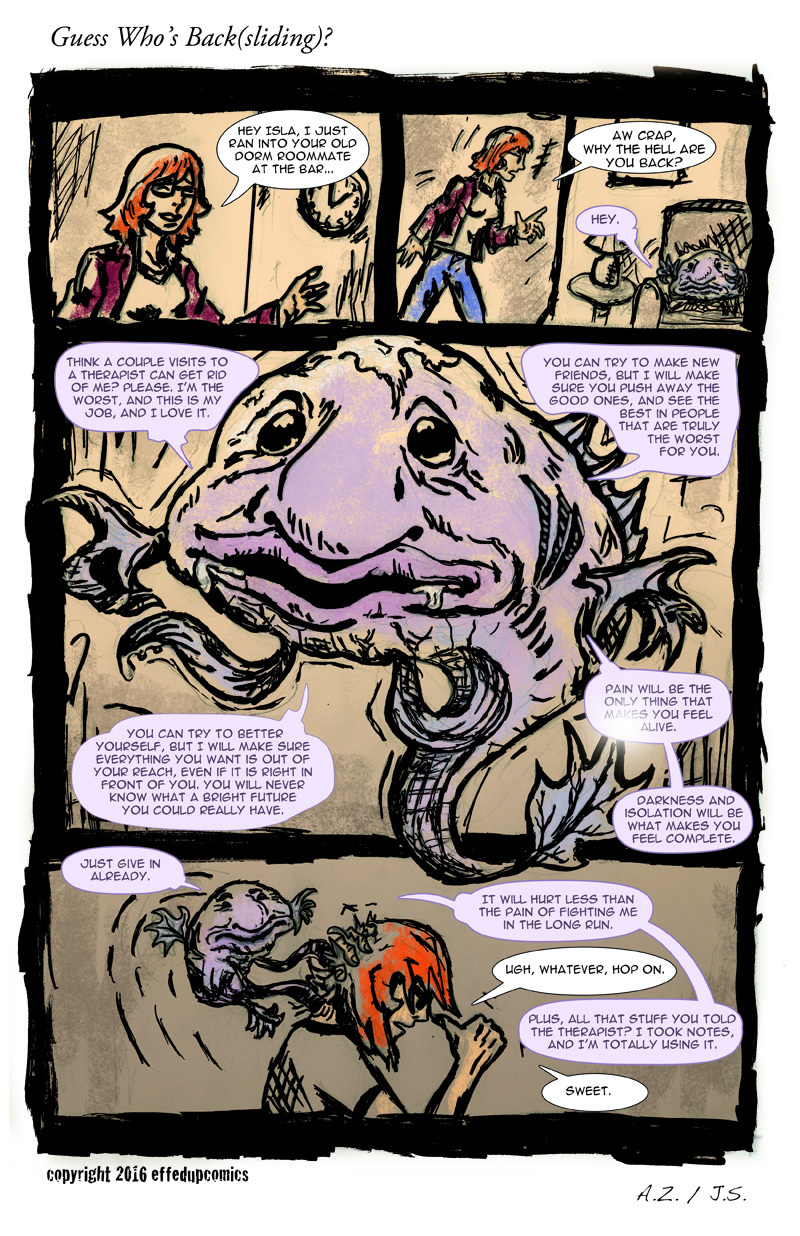 Hey there, long time no see. Welcome to Issue 2.

We’re starting to get a handle on how to do this. Actually drawing and inking by hand, then scanning and digitally coloring. Now we just have to get back on a regular schedule.

In other news, boy, has this year sucked, or what?

Fell a little behind. Logos got made, dishes got washed, cars got stolen. The usual.

I’m trying something new. Adding on in between the story that has already been drawn, by drawing in between the story. So “comic 13″ will actually be “comic 11b” which will actually be drawn completely digitally, instead of my usual process of sketches and pencils and scans and digital inks. It’s obviously not any faster however. And I just started it today. So… friday maybe?

A not so quick word about our late comic this week

Our sincerest apologies for not getting the comic up on time. We were… delayed…

He half-asses everything. The entire house is a ramshackle conglomeration of canted angles, unfinished wood, exposed nails and general shoddy workmanship. But whatever, at least we’re not paying for the upkeep.

Case in point: when the new dryer was delivered, the deliveryman informed us that the fixtures were old and out of date and the ones the Landlord purchased were the wrong size. So they left the new dryer and the Landlord had to go out and buy new ones and install the dryer the next day. Our upstairs neighbor had first dibs and then we started on our growing pile of dirty laundry.

Then over the weekend I noticed a distinct odor of rotten eggs emanating from the stairwell in the basement outside of the laundry room. And the next day it filled the entire basement. Sarah said she smelled it as soon as she walked in the house. I called the gas company and they sent someone out and, yep, there was a leak. Two, in fact, at each point where the Landlord hooked up the new line. So now the gas is off, our laundry pile is mountainous, and the Landlord has to come back out and fix his mistake that he wouldn’t have made if he hadn’t done such a shitty job in the first place.

Also, this weekend my mom was visiting and I had to ferry her around to visit my grandma for Mother’s Day.

So what does all this have to do with not getting the comic up on time?

Nothing, I was just lazy and didn’t finish it. Sorry. It’ll be up before the end of the night probably.